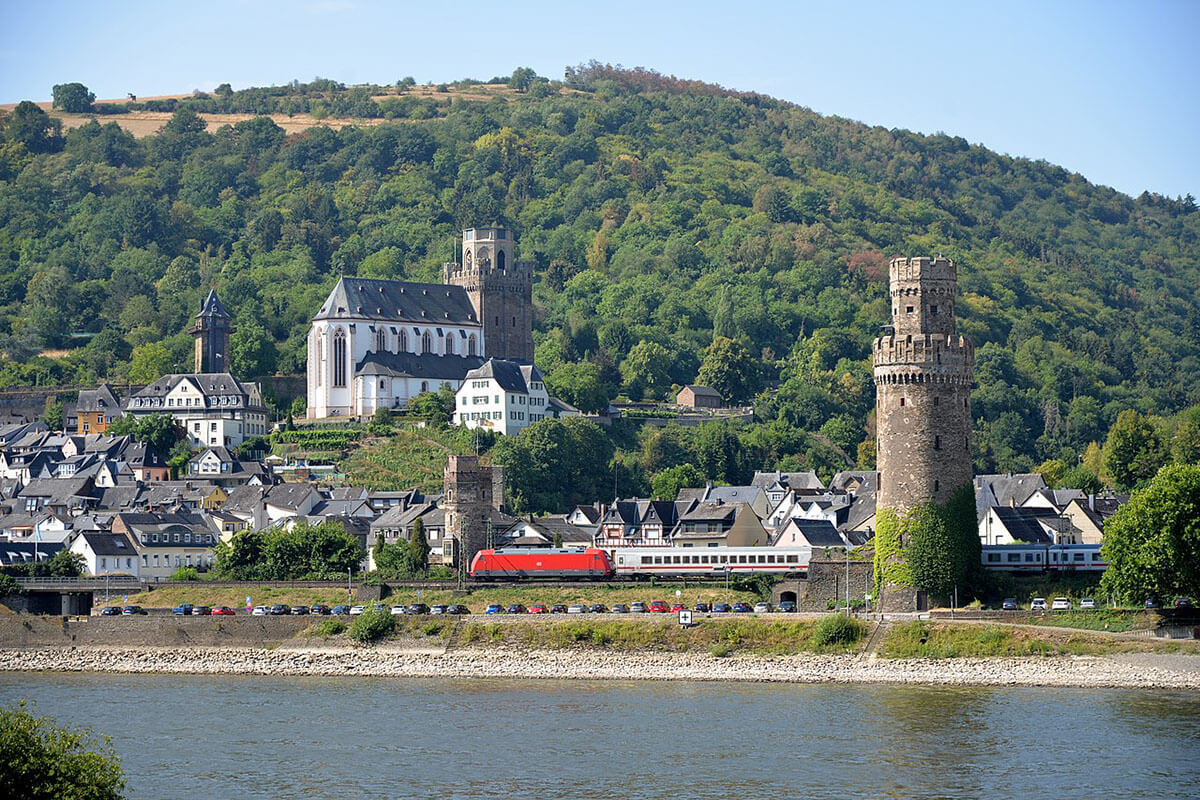 Our Viking cruise took us through the romantic Middle Rhine Valley. As we cruised down this dreamy stretch of the Rhine, we saw medieval towns and castles from the late 12th through the 19th centuries. Plus, we saw the verdant vistas that have inspired many writers to speak poetically of the area’s natural splendor.

During a stopover on our Rhine Getaway cruise, we were able to do a short self-guided tour of Oberwesel, a Medieval town, preserved its medieval silhouette located in the Upper Middle Rhine Valley at the 550 km mark of the river.

The city has a long history, dating back to 50 AD. The Celts settled here, and under the Romans, Oberwesel was a station on a Roman military road.

Traces of the Middle Ages still shape the town today. With the foundation of the Bauverein Historische Stadt Oberwesel eV and other initiatives, the city of Oberwesel is making great efforts to preserve its heritage. A major project was the reconstruction of the city wall with the support of the state government of Rhineland-Palatinate. Today you can walk through many parts of the city wall and see the city from different angles.

Of the original 22 towers, 16 are well preserved. Some are scalable, others are inhabited or used as event locations. The city wall is the best preserved wall on the Middle Rhine.

Oberwesel is not called the city of towers and wine for nothing; the steep slopes of the Upper Middle Rhine Valley with its slate soils in combination with a favorable climate produce wines of the highest quality in the region. In the village, picturesque half-timbered houses, wineries and inns invite you to linger.

The imposing Schönburg Castle was first mentioned in history between the years 911 and 1166. From the 12th century the Lords of Schönburg ruled over the town of Oberwesel and had the right to levy customs on the Rhine river.

Auf Schönburg, with its battlements and towers, straddles high atop a rocky cliff and dominates the town.

The castle was burned down in 1689 by French soldiers during the War of the Grand Alliance and the castle remained in ruins for 200 years until it was acquired by the German-American Rhinelander family who bought the castle from the town of Oberwesel in the late 19th century and restored it.

Oberwesel takes pride in its churches, the most prominent being, the Church of Our Lady (Pfarrkirche Liebfrauen), the Minorite Monastery, Werner Chapel (Wernerkapelle), and Saint Martin’s Catholic Parish Church (Pfarrkirche St. Martin).

Church of Our Lady

Located on the southern a part of Oberwesel, the Church of Our Lady is regarded as one of the best examples of the extraordinary architecture that marked the cathedrals of the Middle Ages. It looks very magnificent even from a distance, living up to its distinction as one of the most significant high Gothic church buildings in the Rhineland.

The structure is stark and unadorned; defined solely by clean and sharp geometric shapes. The interior is magnificent with a lofty ceiling, its heights made more pronounced by the soaring central nave.

The church has a high gothic altar. The triptych altarpiece looks remarkably like the magnificent façade of a medieval cathedral. It is intricately ornamented with columns, gables, arcades, and roses amidst a gold background. The presbytery is spanned by vaults standing on pillars.

The Minorite Monastery is another Gothic church in Oberwesel. It is well-known for its beautiful ensemble that includes the sacristy, the church ruins, and the monastery garden.

The sacristy is famous for its unique architectural form. It took extensive reconstruction work during 2006 to restore the 15th century sacristy to its original glory.

Today’s Werner chapel is only the chancel section of a formerly larger hospital church. As early as 1270, the Franciscans founded a Holy Spirit Brotherhood to take care of pilgrims and the sick. A hospital with a church, probably a Holy Spirit church, has been documented in Oberwesel since 1305.

Werner Chapel (Wernerkapelle) evokes the memory of a darker chapter in the city’s history when the Jewish community in Oberwesel were falsely blamed for death of a young boy, an accusation that resulted in riots during which forty people were killed.

After the building was destroyed in 1689 during the Palatinate War of Succession, only the chancel was rebuilt as a chapel for the hospital. In connection with the city wall, whose battlement is led through the buttresses, with the baroque hood and the street passage, it forms a highly attractive picture.

Saint Martin’s Catholic Parish Church (Pfarrkirche St. Martin) is a 14th century church’s whose most impressive feature is probably its belfry which appears to be a part of a tower rather than a church. A sacral defensive construction, it served a defensive purpose during the war Wesel Krieg (Wesel War) along with battlements and embrasures. The Baroque altar bear intricate medieval wood carvings and the walls have mural paintings.