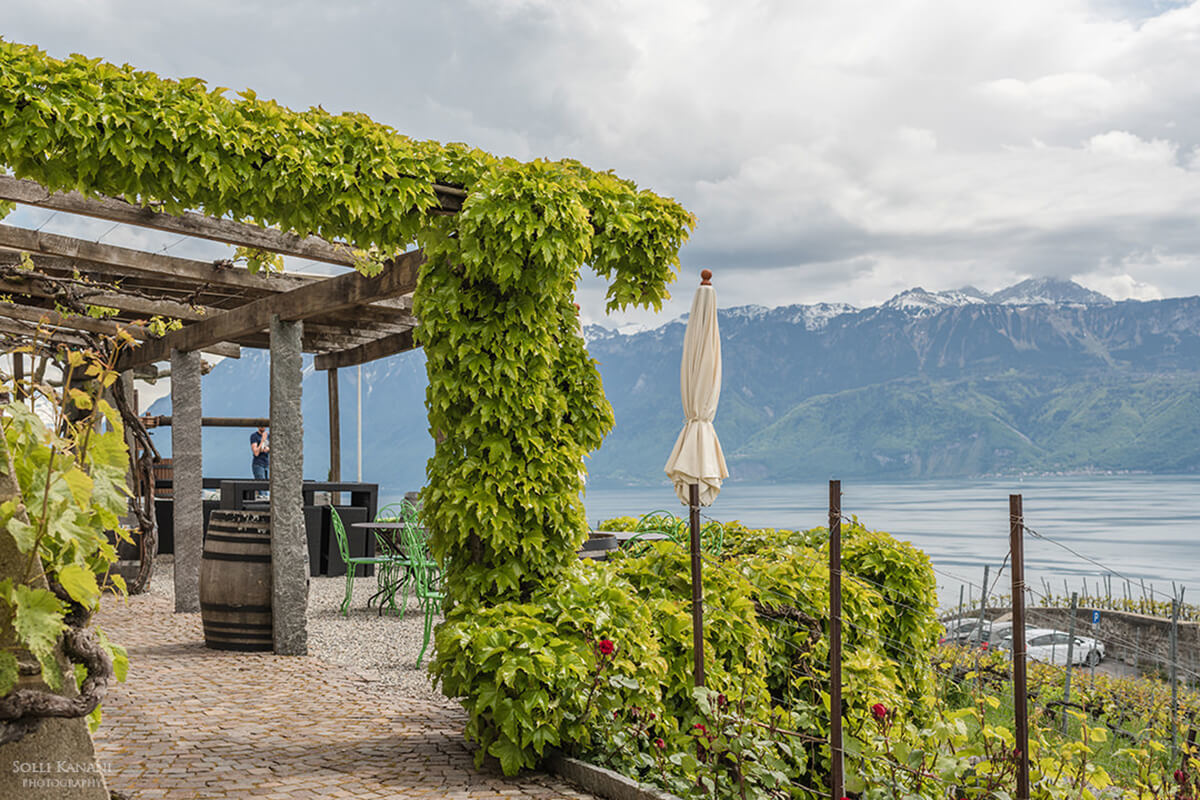 The vineyard Domaine de Daley is more than 700 years old and during our Viking Rhine Getaway cruise, which included visiting Switzerland, we spent an afternoon for a wine tour and a wine tasting.

Our first thought when arriving at the Domaine du Daley winery in Switzerland was: “I hope the wine is as good as this view!”

Domaine du Daley is one of a dozen wineries perched on a hilltop in a wine-growing region called Lavaux, and this view is a panoramic view of Lake Geneva.

The Domaine du Daley was founded in 1392, making it the oldest commercial entity in Switzerland. It stands on an historic site with a panoramic view of Lake Geneva. It is situated in the heart of the terraced vineyards of Lavaux Vineyard Terraces, a UNESCO world heritage site since 2007.

The Lavaux Vineyard Terraces, stretching for about 30 km along the south-facing northern shores of Lake Geneva from the Chateau de Chillon to the eastern outskirts of Lausanne in the Vaud region, cover the lower slopes of the mountainside between the villages and the lake.

Although there is some evidence that vines were grown in the area in Roman times, the present vine terraces can be traced back to the 11th century, when Benedictine and Cistercian monasteries controlled the area. It is an outstanding example of a centuries-long interaction between people and their environment, developed to optimize local resources so as to produce a highly valued wine that has always been important to the economy.

Once you have taken in the fantastic view, you will be taken through the basement, which will take you through a room filled with huge barrels. It is in these barrels that the wines “rest”, the whites rest for 11 months and the reds for 11-22 months.This is not a mass production warehouse.

The sipping room, another interesting area, was used by the monks; Domaine du Daley, dating back to 1392, is Switzerland’s oldest winery.

The tour includes the fermenting cellar but since the cellar, like other cellars in this area, is quite small, it takes less than half an hour to tour. So there is more time to taste the wines.

Domaine du Daley makes 22 varieties of wines, about 60% red, 40% white and one rose. It’s biggest seller is a smooth-tasing white called La Chasselas. Other whites are pretty light, as is the case with many Swiss wines. If you like reds, you can’t go wrong, or do much better anywhere, with its Le Pinot Noir.

The wines are served in Swiss restaurants and exported to a few countries, primarily Japan, China and Russia.