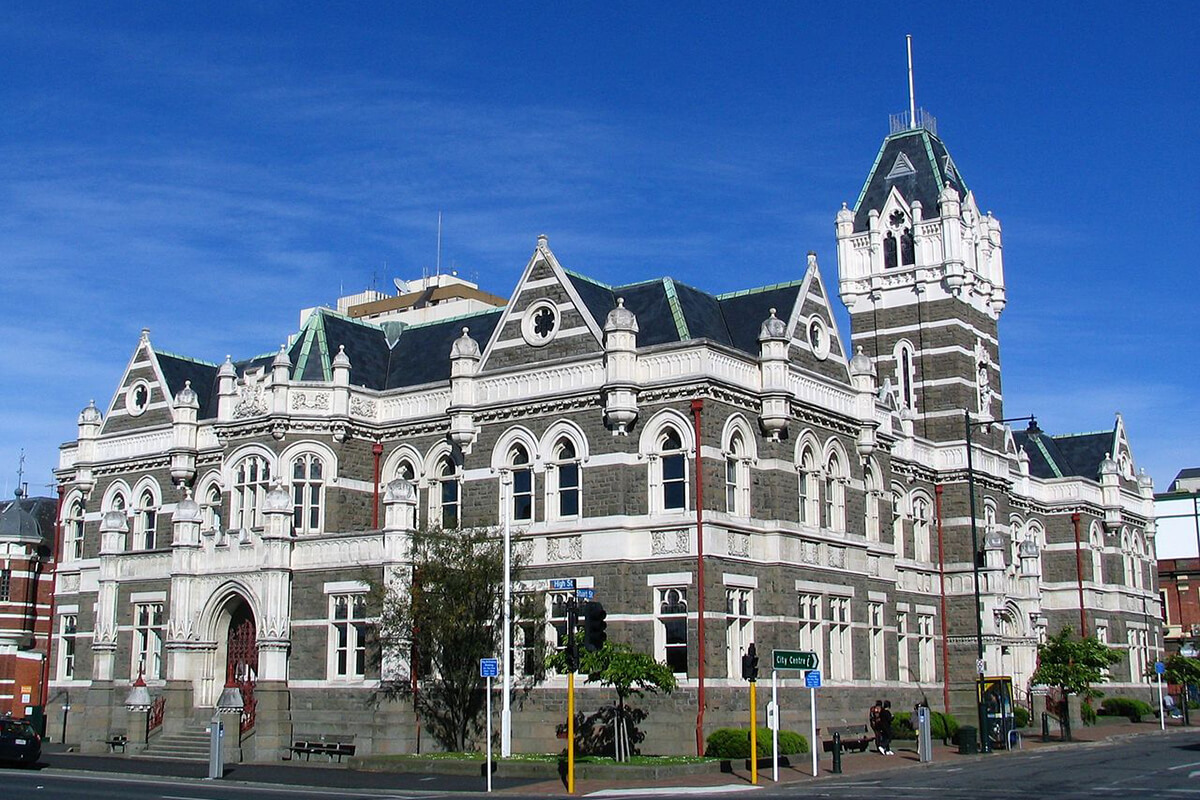 Dunedin (pronounced “Dunn-knee-din“) is perched on the hills above one of New Zealand’s loveliest harbors. A Kiwi city with a Scottish heart and hailed as the “Edinburgh of New Zealand,” Dunedin is proud of its heritage. A statue of famed Scottish poet Robert Burns graces downtown, and the presence of New Zealand’s only kilt maker and whisky distillery – as well as many bagpipe bands – keep Dunedin’s ties to Scotland alive. The city also boasts a distinguished architectural and cultural history, a legacy of New Zealand’s 1860s gold rush.

Port Chalmers, gateway to Dunedin, is located eight miles from the city center. Dunedin is a planned city: its streets and suburbs fan out from the city’s octagon.

A 35-room Jacobean mansion built by David Theomin in 1906, Olveston House is filled with treasures collected on Theomin’s world travels. It is a stunning example of the stately architecture created for the privileged families of Dunedin’s high society. This historic home became a museum in 1967. Walk through its lavish rooms and step back in time, as little has changed since it was occupied as the family home. Admire modern touches incorporated into its design such as an elevator and an electric generator as well as ornate furnishings, antiques and artwork from around the globe.

This is New Zealand’s oldest botanic gardens, home to a rhododendron dell and a rose garden. The lower gardens feature rose and herb plots, a duck pond, a band rotunda, a Japanese garden and the rippling waters of Lindsay Creek. Established in 1863, it hosts a variety of plant collections set amidst 72 acres of natural beauty. Explore the formal paths and discover some of the 6,800 different species of plants from all over the world.

Built between 1873 and 1877, this magnificent neo-Gothic estate was built for William and Eliza Larnach and their six children by renowned architect Robert Arthur Larson and commands the highest point on the Otago Peninsula. Approximately 200 men spent three years building the shell of the 40,000-square-foot mansion overlooking Dunedin, Otago Harbour and the Otago Peninsula. Then a team of European craftsmen stepped in to finish the interior, including a 3,000-square-foot ballroom added for the 21st birthday of Larnach’s favorite daughter, with a lavish array of masterful embellishments.

Be prepared to partake of a delicious morning or afternoon tea, featuring a delicate blend, coffee, scones, and shortbread in the castle’s ballroom.

Dunedin is the old Gaelic name for Edinburgh, and many Scottish influences are seen throughout this fair city, making it quite different from anywhere else in New Zealand or Australia. Of all New Zealand cities, Dunedin boasts the largest concentration of Victorian and Edwardian buildings due to its rapid growth before and just after the turn of the century. Soak up the grandeur of its architecture from the classical ANZ Bank to the Octagon, an eight-sided plaza that forms the core of Dunedin’s lively business district and provides views of notable landmarks like the Town Hall, the Municipal Chambers and St. Paul’s Cathedral-all watched over by a statue of poet Robert Burns.

Standing the test of time Carey’s Bay Hotel is in one of the most beautiful and unique destinations you will hope to find in New Zealand. The Carey’s Bay Historic Hotel was originally built as a hotel including a public bar and restaurant. No longer with accommodation, the Victorian pub has an excellent reputation for fresh seafood meals and friendly old fashioned hospitality. Situated next to the township of Port Chalmers on the banks of the beautiful Otago Harbour. Now a free house, this is the perfect experience for craft beer lovers. You will taste three locals’ beers from the South Island region. Matching the beers with be local produce including amazing cheeses from just along the coast. If you are a seafood lover, there is a treat in store! Carey’s Bay Hotel is the only place in the country to be able serve the utterly delicious Queen Scallops! This is a unique Local Connection!

Nicknamed the “Gingerbread House,” this magnificent building was originally built in the Flemish Renaissance style. Famed for its Victorian elegance, the intricate tile floors and detailed glasswork are exemplary. It is considered one of the most photographed buildings in New Zealand.

This is a thrilling two-hour cruise that showcases the abundant wildlife in its natural habitat and the scenic beauty of the Otago Peninsula. The MV Monarch is a nimble sightseeing vessel that cruises from picturesque Port Chalmers along the Otago Peninsula, rich in geological and historical significance.

Taiaroa Head is unique in the world for the variety of the bird and marine life found here, including an albatross breeding colony that is now a protected nature reserve and is home to around 140 birds. Held aloft on slim wings up to 10 feet across, they provide awesome aerial displays.

From the deck of your vessel, you can watch pretty Port Chalmers as you head into the Otago Peninsula. Volcanic in origin, the oval form of the Otago peninsula and harbor is part of the crater wall of a large, long-extinct volcano. Here is a dramatic 1860s lighthouse, 100-year-old fort, network of tunnels, and unique albatross-breeding colony, it draws thousands of visitors every year.

Your skipper will steer the vessel close to the headland, an established colony of around 140 albatross birds. Hold your camera steady to capture their 10-foot wingspan, and admire their awesome aerial displays. You can also focus your lens on additional wildlife, such as blue penguins, New Zealand fur seals, and Hooker’s sea lions as they hang out on rocky ledges and fish for their supper, right before your eyes.

A world-leading conservation and research facility, the Blue Penguin Colony is an opportunity to glimpse these adorable penguins. Though they are visible around the colony at night, if you’re lucky, you may be able to see this nocturnal bird during the day at a viewing facility that allows you to look into the top of 10 nesting boxes. Every year, adult birds come to Oamaru’s shores between May and June to find the perfect nesting site and lay two eggs from August to November.

Oamaru is quaint seaside town on the east coast about 90 minutes north of Dunedin. Take a step back in time as you stroll past some of New Zealand’s most acclaimed 19th-century structures with a special nod to the Steampunk Train. Steampunk, inspired by the writing of H. G. Wells and Jules Verne, and in TV shows such as “Dr. Who,” is a quirky and fun genre of science fiction that features steam-powered technology.

Stop for a look at the geological wonders known as the Moeraki Boulders. Measuring nine feet in circumference and six feet tall and weighing several tons, the gigantic spherical stones, according to Maori legend, are the washed-up remains of food baskets from a large canoe that sailed from Hawaiki and perished at sea. But really the unusual rocks were created about 60 million years ago and are the result of erosion, time and concretion.

Mt. Cargill and The Organ Pipes

Mount Cargill is the most prominent peaks in Dunedin, in Maori legend, the three peaks of Mount Cargill represent the head, body and feet of an Otakou tribe princess. The Mount Cargill hike is most suited to those who are physically fit. The climb ascends through a forest of secondary growth to be rewarded with views of Otago Harbour, Mihiwaka, Mount Kettle, Blueskin Bay and the Silver Peaks. Head into Mount Cargill’s native bush, containing broadleaf, tree fuchsia, pepperwood, mountain cedar, emergent totara and many lush ferns as well as the Organ Pipes. Continue through manuka, kanuka and dracophyllum scrub, finally emerging at Butters Peak, 2,000 feet above sea level.

The Organ Pipes, columns on Mt. Cargill, are a famous landmark, 10-million-year-old basalt formations created during the volcanic activity that formed Otago’s harbor.