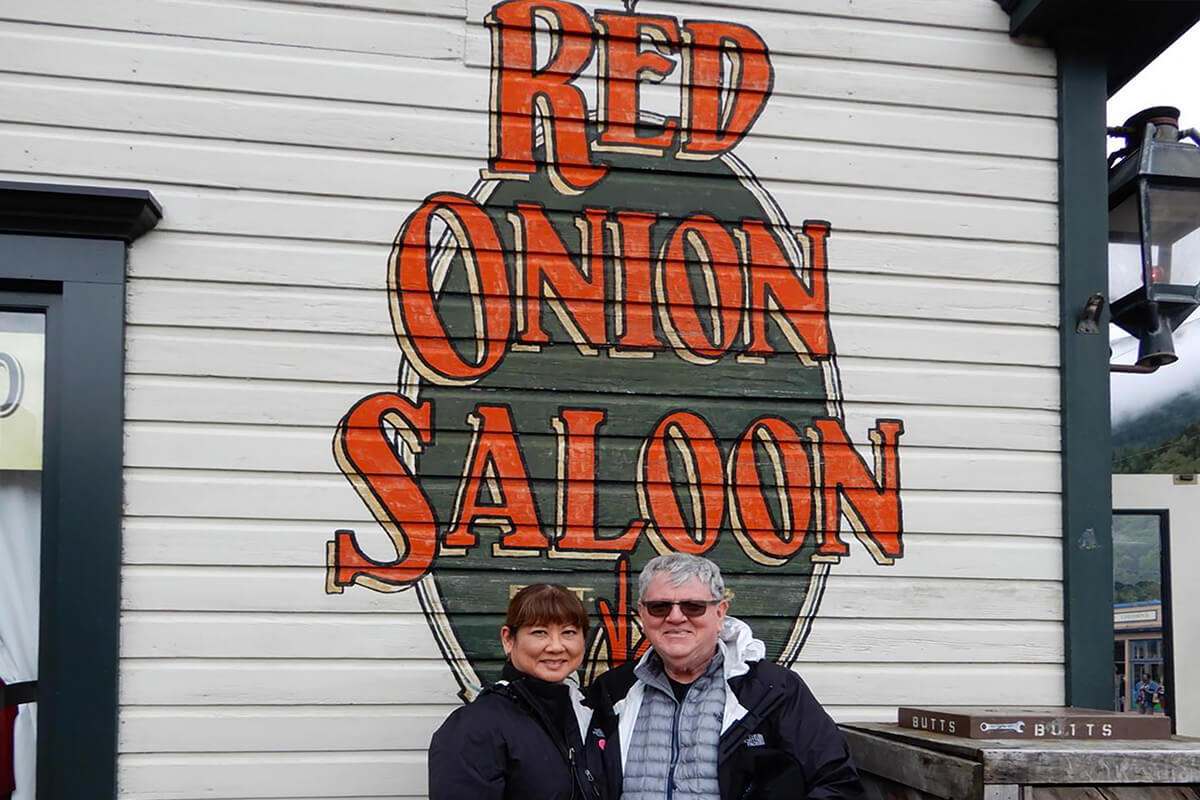 Skagway was the gateway to the gold fields for the thousands who flocked to Alaska and the Yukon with the hope of striking it rich. Skagway may have boasted the shortest route to the Klondike, but it wasn’t the easiest.

Over 100 years ago, the White Pass route through the Coast Mountains and the shorter but steeper Chilkoot Trail were used by countless stampeders. Many a would-be miner perished on the treacherous Chilkoot Trail.

The gold rush was a boon and by 1898, Skagway was Alaska’s largest town with a population of about 20,000. Hotels, saloons, dance halls and gambling houses prospered. But when the gold yield dwindled in 1900, so did the population as miners quickly shifted to new finds in Nome.

Today, Skagway has less than 1,000 residents. It still retains the flavor of the gold rush era.

The “Scenic Railway of the World” links Skagway with Yukon, Canada. A 41-mile roundtrip offers an unforgettable journey to the summit of the White Pass at nearly 3,000 feet in elevation.

This 3.5-hour eye-popping experience gave us spectacular views and plenty of photo opportunities.

Our guided tour began when we boarded a mini-bus at the port and drove through the boardwalk-lined streets and false-front buildings of Skagway. Once we left the city behind, we were headed north along the Klondike Highway, which closely parallels the route used by prospectors in the Klondike Gold Rush of 1898.

The mini-bus had large picture windows that afford fantastic views of the St. Elias Range, the highest coastal range in the world. As we steadily climbed one of North America’s most scenic mountain roads our guide shared tales of the hardships endured by earlier travelers in their quest to reach the interior as you pass numerous landmarks, including Dead Horse Trail, the old Brackett Wagon Road, Pitchfork Falls and Moore Bridge.

Once we reached White Pass Summit, we were stunned by the mountaintop’s other-worldly appearance; a harsh volcanic, rocky, desolate terrain, which was carved by retreating ancient glaciers. At an elevation of over 3,000 feet, this landscape boasts 300-year-old stunted juniper trees and dwarfed spruces that only stand two or three feet tall, and ice-blue glacier lakes. From there we continued on over the pass to the train depot in Fraser, British Columbia. Here, we transferred to a vintage narrow-gauge railcar for a spectacular trip aboard the world famous White Pass & Yukon Railroad, a designated International Historic Civil Engineering Landmark.

Constructed in 1898 for easy access to the gold fields, the White Pass & Yukon Route Railroad was built by tens of thousands of men who overcame Alaska’s harsh climate and challenging geography to create “the railway built of gold.” The vintage cars have been fully restored, with comfortable passenger coaches and large picture windows that frame the breathtaking panorama of mountains, glaciers, gorges, waterfalls, tunnels and trestles. Then, you’ll travel onto the opposite side of White Pass, down into the canyon and along cliff-hugging curves and dramatic gorges.

Liarsville is where you can relive the color and history of the Yukon Gold Rush. We toured the camp, panned for gold and met a few costumed characters who showed us what life was like during the boom-town days in the 1800s.

After our morning excursion, we had worked up an appetite, and the hearty salmon bake buffet at the Liarsville Gold Rush Trail Camp was just what we needed to satiate our appetite. Our meal included wild Alaska salmon grilled over an open alder wood fire, baked chicken, a variety of salads, beans, rice pilaf, cornbread and dessert.

After our meal, we wandered through the Liarsville camp, so named for the tall-tales that journalists reported from the area during the excitement of the Gold Rush. We found plenty of unusual souvenirs in the rustic-style general store. We even tried our hand at panning for gold and managed to come up with a tiny speck of ‘yellow’.

During the Klondike Gold Rush, the Red Onion Saloon was Skagway’s most exclusive bordello. Now this colorful establishment is a bar/restaurant and a National Historic Building.

The Red Onion Saloon still hosts live music events and drag shows. There are plenty of items on display throughout the restaurant. Racy, old-time portraits of alluring women adorn the walls and visitors can enjoy a glass of beer underneath a rather extensive display of bedpans. Upstairs, the museum showcases the 10 original rooms where the saloon’s madam and her girls would entertain clients. Customers chose women by picking from one of the 10 dolls placed at the bar, each representing one of the working ladies upstairs. When a doll was chosen, it was laid down on the bar, indicating the woman was at work. When her client came back downstairs, the doll would be seated upright, to let potential customers know she was available.

Legend has it that Lydia, a former madam at the saloon, haunts the place today. The smell of perfume down the hallways or particularly cold spots near the upstairs rooms are considered signs of her ghostly presence.

This adventure begins at the dock where you board a van for a 20-minute narrated drive through historic downtown Skagway and then up the Klondike Highway. A short walk on a rainforest trail brings you to the spectacular adventure park where expert guides will outfit you with the proper safety equipment and instructions. Then you’re off to enjoy the thrill of the ropes course and zipline experience.

Start by entering into an incredible series of ropes course crossings including Burma loops, suspended bridge and raised balance beam. Next up is a fantastic series of six ziplines through the lush Alaska canopy. As you zip from platform to platform, fellow participants cheer you on. Your heart will be pumping as you prepare for the “Walk the Plank” segment soaring high above the ground through the treetops.

You’ll have approximately 2 1/2 hours to enjoy this unique adventure featuring amazing mountain views and the excitement of effortlessly soaring through the air! Afterwards, enjoy a quick snack of hot cocoa, coffee and trail mix – included with your tour – before heading back to the pier.

Experience the thrill of zooming through the Alaskan landscape on the back of a dog sled. Led by a professional musher and 16 huskies, you’re in good hands (and paws). This is an unparalleled winter adventure. After the ride, get cozy with Alaskan husky puppies during a designated cuddle and play session.

When your ship drops anchor in Skagway, make the most of even limited time on dry land on a shore excursion that reveals the Chilkoot Trail, which runs alongside the Taiya River. As well as exploring on foot, you’ll get a different perspective of the scenery during a ride on a rubber raft.