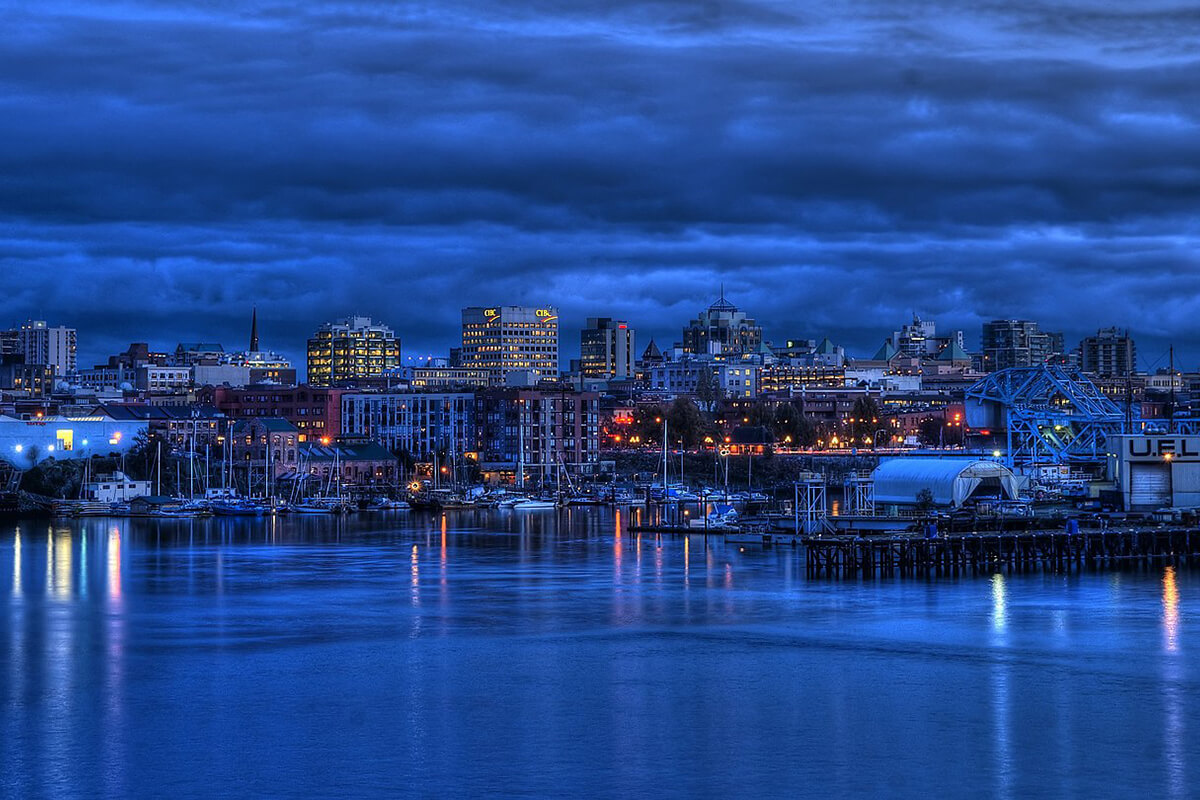 Victoria, western Canada’s oldest city, was founded in 1843 as a Hudson’s Bay Company trading post. Victoria’s early history has been carefully preserved and can be seen in lovingly restored residential, commercial and public buildings. This city is the most “British” in all of Canada and boasts prominent reminders of its colonial past.

Butchart Gardens, located on the Saanich Peninsula in Victoria, British Columbia, is a National Historic Site of Canada. After a short motorcoach ride, we found ourselves surrounded by 55-acres of some of the most lavish and lush landscaped grounds in the world. Colorful blooms, rare flowers and themed gardens greeted us as we meander through the gardens over footbridges, past cascading fountains and charming lily ponds.

This tour is usually conducted in the evening which meant limited sunlight for photography; however, the gardens are illuminated with subtle lighting displays.

After dusk, the gardens are transformed by hundreds of lights of varying intensity and color. This nightly transformation, known as Night Illuminations is as unique as it is breathtaking. The magnificent Rose Fountain, the centerpiece of these lush gardens, dances with creative lighting while outdoor entertainment accompanies the effects.

This is a 1.75-hour, self-guided tour and we had ample time to appreciate the splendor and even had time to browse the gift shop for souvenirs commemorating our evening.

The tour is said to feature the “exotic Victoria Butterfly Gardens a spectacular, color-drenched habitat that houses a multitude of butterflies, tropical flowers, birds and fish in a warm, lush setting.” Well, our tour was after dark – which was not made clear to us when we signed up for this excursion. Want to guess what butterflies do at night? They sleep; so this excursion was a complete waste of money.

Board the horse-drawn trolley at the cruise ship terminal and begin a scenic tour through the picturesque city of Victoria. This one-hour tour makes its way through Victoria’s residential areas with an impressive variety of homes and gardens and offers views of such scenic splendor as the Olympic Mountains and the Strait of San Juan de Fuca as you return to the ship via the waterfront.

Meander through the historic neighborhood of James Bay, marvel at the old world architecture of the Legislative Buildings and pass the stunning Inner Harbour bustling with activity. Continue through the heart of Victoria for a view of Beacon Hill Park, and take in the beauty of the colorful wild flowers and lush foliage that fragrant this 154-acre haven.

Completed in the late 1800s by Robert Dunsmuir, docents share the interesting story of an impoverished Scottish coal miner who became the wealthiest and most influential man in British Columbia. This stately mansion includes 39 rooms and 17 fireplaces. Explore the exquisite, 20,000-square-foot living spaces, the colorful stained glass windows and the lavish furnishings and woodwork used throughout the castle’s design. The castle’s art collection includes thousands of outstanding displays of Victorian artifacts. Craigdarroch Castle is truly a masterpiece of “High Victorian” architecture and a very significant Canadian heritage treasure. A walk up the 87 stairs to the high towers is well worth the climb, as the views of the city and the surrounding natural scenery are outstanding.

Dedicated to the preservation of aviation history, the museum has collected and lovingly restored aircraft and artifacts related to Canada’s history of aviation, and many of the exhibits pertain specifically to British Columbia. After arrival, you’ll have ample time to explore this fascinating museum, which is spread out inside two large airplane hangars.

The museum displays more than 20 aircraft, and the collection contains not only planes, but also an array of interesting engines, pictures, models and artifacts. Your guide will take you through the memorial room, point out special items and displays and take you through the restoration hangar. Peruse military exhibits of medals and uniforms from the wars that Canadians have fought, including memorabilia from the Royal Canadian Air Force.

High points include a Bell 47 helicopter with its goldfish bowl canopy. This particular helicopter has a long and interesting history, including a stint on the television show “MAS*H”! You will also see the Eastman E2 Sea Rover, which is unique to Canada and British Columbia and has the distinction of being the only example of its kind left in the world! The museum also houses a Gibson Twin Plane, one of the most significant planes in Canadian aviation. It was built and flown in Victoria, Canada, and the aircraft on display is an exact replica of the original.

The museum is constantly restoring new acquisitions, so there is always something new to see. Be sure to check out the well-stocked museum gift shop for a fine selection of models and mementos.

This charming family-owned orchard and cider house is renowned for producing exceptional organic cider and is set in a picturesque locale with ocean views. Here, you’ll tour the facility and learn about the process that takes apples from orchard to glass before stepping into the spacious Tasting Room with its soaring ceiling and beautiful vintage chandeliers.

Sea Cider makes a wide variety of products, each with its own distinct flavor and quirky name. You’ll sample a flight of five different hard ciders – which may include “Wild English” – made with bittersweet cider apples grown on site – or “Kings and Spies,” which is handcrafted from Victoria’s heritage apples. “Bramble Bubbly” gets it sweetness from the blackberries that grow on the island, and “RumRunner” which includes local rum and has been aged in bourbon casks.