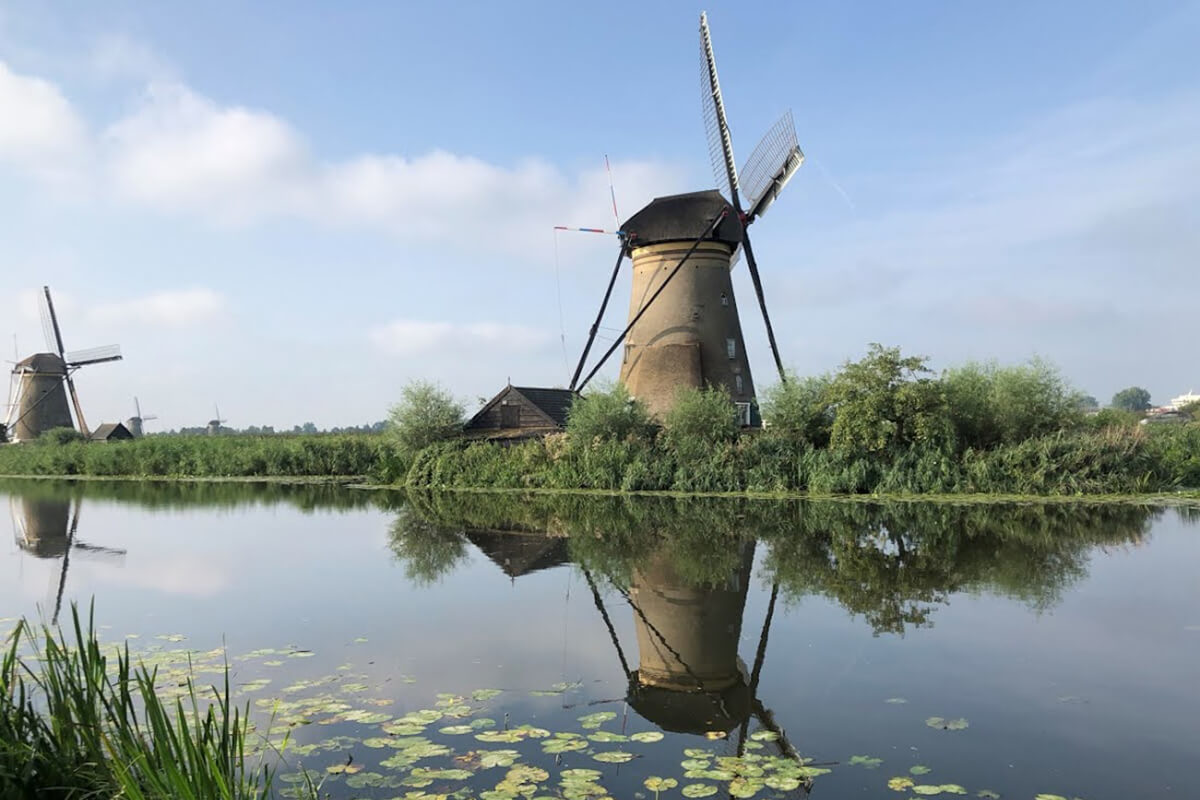 Kinderdijk is a village in the the Netherlands’ South Holland province, known for its iconic 18th-century windmills. The Kinderdijk windmills are probably the most famous and most photographed windmills in the world. But behind the picturesque dreamy landscapes, there is a lot of history as well. The windmills are part of a water-management network featuring 19 mills and 3 pumping stations, plus dikes and reservoirs that control flooding in the polder (low-lying land). Waterways, footpaths and bike trails crisscross the area, leading to the main visitors center and museums in preserved working windmills.

The name Kinderdijk is Dutch for “Children dike”. There is a legend that, during a flood, wooden cradle containing a baby was floating on the water and a cat was jumping from side to side in the cradle to keep it balanced; this legend has been published as “The Cat and the Cradle”.

At Kinderdijk, you can visit two windmills – museums Nederwaard and Blokweer. Also, make sure to not miss the multi-screen film in the secondary pumping station and an engine room in Wisboom pumping station.

Nederwaard Museum Mill dates from 1738. This mill was home of the Hoek family for several generations. Visiting here, it’s like stepping back in time and experiencing what life of miller’s families used to be. Inside, you’ll find historic photos and all kinds of household items used by real miller families.

What left the biggest impression on use were the sails of the windmills. Words can not explain what it feels like to be standing next to the giant sails spinning at a high speed. It’s mesmerizing and frightening at the same time. Luckily, everything in Kinderdijk is now built in such a way that you cannot accidentally get hurt by a turning sail.

The Dutch saying “een klap van de molen krijgen” means ‘to get hit by a windmill’; some Dutch use the phrase to say that someone has a screw loose.

Blokweer Museum Mill is one of the oldest mills in the area, built in 1630. Nowadays it’s a museum where you can experience what life was like in the Netherlands in the beginning to mid 20th century. In high season, you’ll meet the millers wearing traditional garments and can take a short tour of the mill. Kids will love meeting goats who live here.

This is the best place to start your visit of Kinderdijk. Make sure to watch the multi-screen film that takes you on a virtual trip through the centuries-old history of Kinderdijk. If you ever wondered where Kinderdijk (Children’s Dike) got its name or want to learn more about the history area before setting to explore it, then this film is a must. The film is very well done and really worth a few minutes of your time. It’s available in different languages, including Dutch, English, Japanese, French, and German.

Wisboom Pumping Station is one of the historic buildings that you should visit inside. This pumping station dates from 1868 and, back then, was used as a modern and more efficient way to pump the water from this area out into the river beyond. It was in operation till 1995 when a new pumping station replaced it. Nowadays it serves as a museum. One of our favorite things was a tabletop game with miniature windmills that you can operate all by yourself putting the polders under water and trying to drain them again.

Cycle through the grasslands of Kinderdijk and see the 19 historic windmills, a UNESCO World Heritage Site. Don your cycle helmet and meet your guide before mounting your bike through stunning scenery. The cycle route takes you through the polders, or low-lying lands, along the Lek River. As you cycle through this network of windmills, your guide will explain how this magnificent sight symbolizes Dutch water management today. During your bike ride, you will pass several of the windmills up close.

Go beyond the usual visitor experience and visit the oldest Kinderdijk windmill. Board the Jantina, a 125-year-old restored cargo vessel, adapted to carry passengers to the Blokker Windmill, which dates back to 1630. Meet the miller and his family and tour the windmill. Take a peek at the vegetable garden and see the traditional outbuildings, such as the cooking shed and the outhouse. Learn everything there is to know about the life of a miller’s family in days gone by and also what it takes today to preserve these mighty machines. On your way through the canal and back, your expert guide will explain the history of water management in the region and the vital role of the magnificent mills in this endeavor.