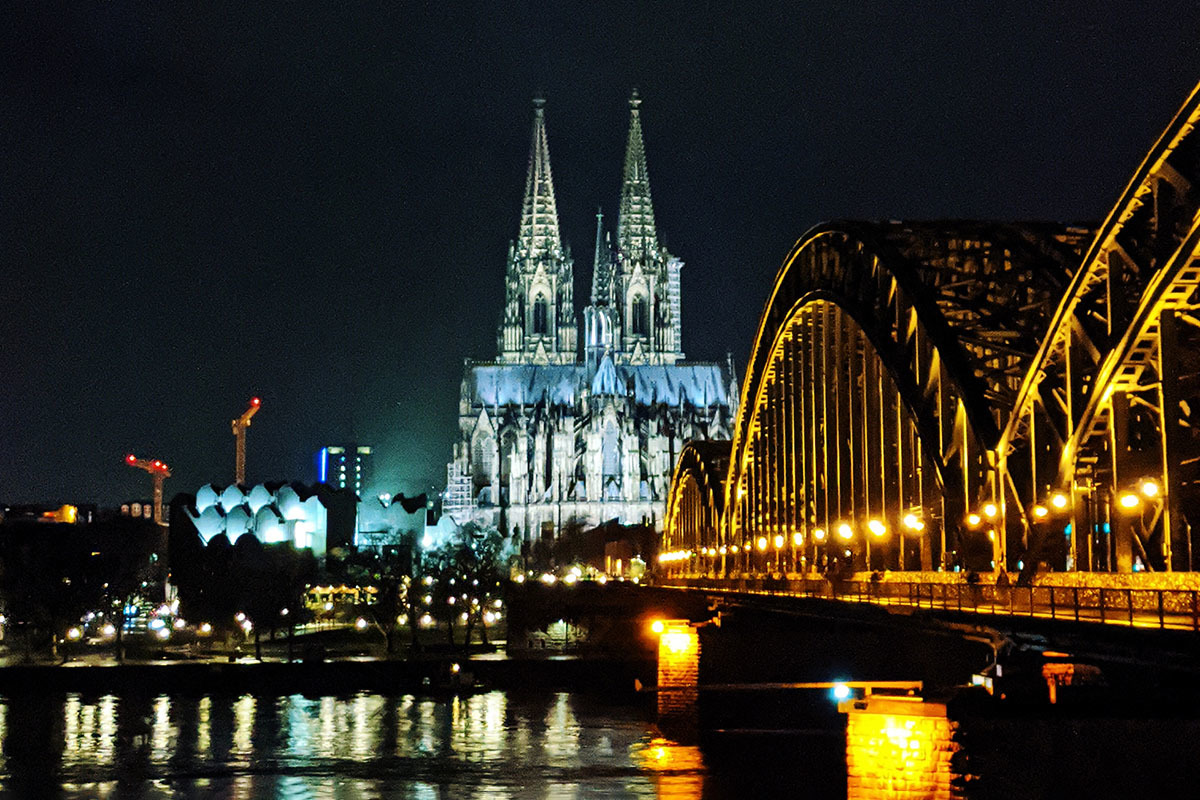 Located near the left bank of the Rhine, Cologne Cathedral (Kölner Dom) is the city’s towering landmark. Officially called the Cathedral of St. Peter and St. Mary (Hohe Domkirche Sankt Petrus), this stunning edifice is a masterpiece of High Gothic architecture, and a UNESCO World Heritage Site.

The grandeur of Cologne’s romantic Romanesque meets grand Gothic Kölner Dom draws crowds from around the world on a daily basis. The dual towers of the Dom stand tall above the city and can be spotted on pretty much every touristic trinket from the city. Here are a few things you should know before visiting Cologne Cathedral.

As is the case with so many cathedrals, basilicas, and large churches throughout Europe, Cologne Cathedral was constructed over many centuries. In fact, though construction of the ecclesiastical building began all the way back in 1248, the two towers were not completed until 1880.

There has been a Christian church on site since around the 4th-century. Prior to the current cathedral, the church before had been constructed during the 9th-century. However, it was decided that the building was not grand enough to house the relics of the biblical Magi and so the church was demolished – actually it burned down during demolition work in 1248.

The first stone of the church you see today was laid by Archbishop Konrad von Hochstaden on the Feast of the Assumption of Mary on 15 August 1248.

For more than 300 years, the cathedral remained unfinished and was used as it was; the North tower pretty much nonexistent and the South tower overshadowed by a building crane.

During the 19th-century, all of this changed with the resurgence of romantic enthusiasm for the Middle Ages. Construction resumed in 1842 and the Cathedral’s completion was celebrated on August 14, 1880. Luckily the completion of the building in the 19th century took place using the old design plans but were completed with newer and more stable building techniques that had been established in the intervening years.

During the 1950s, the cathedral was renovated following heavy bombing during WWII; the cathedral being bombed no fewer than 14 times. Maintenance work on the building is ongoing to this day with approximately 80 people employed to oversee its survival for future generations.

This imposing Gothic Cathedral is Cologne’s most famous landmark and the pride of its people – regardless of their religious affiliation. And, from a glance outside, the cathedral is nothing short of stupendous and magnificent.

The exterior of Cologne Cathedral is extremely difficult to photograph. Located in the center of the city, the cathedral is so massive that it’s almost impossible to fit the entire building into the frame. Any time we were near the cathedral during our visit, I could only see small portions of the building that weren’t obstructed from view.

Cologne Cathedral boasts many records, ‘firsts,’ and is typically near the top of many European visitors’ bucket lists. The Cathedral is the largest Gothic Church in Northern Europe, is the highest twin-spired church in the world, and is the second tallest church in Europe.

Cologne Cathedral has no shortage of hidden gems worth discovering, as well as some of the most important pieces of Biblical artwork in Europe.

The shrine of the Three Wise Men

The true highlight of the cathedral was what led Cologne to such prominence during the Middle Ages and indeed many a Christian pilgrim has made the journey to Köln purely for the chance to see the Shrine of the Three Wise Men, which is believed to be the largest reliquary in the Western world.

The relics, or ‘mortal remains’ as they are sometime referred to, were brought back from the conquered City of Milan by Frederick Barbarossa and given to then Archbishop of Cologne, Rainald von Dassel, in 1164.

Now encased in a gold gilt case which was conceived by Nicholas of Verdun and was completed in the 1220s, the shrine is to be found behind the High Altar of the cathedral.

Tombs in the Cathedral

There are countless stained glass windows, each one very beautiful and quite different from the other.

Some of the glass dates all the way back to the 14th-century and can be dated thanks to the appearance of various coats of arms. Elsewhere in the cathedral, one of the Biblical-themed stained glass windows is one of the oldest in Europe.

As you can imagine, it is difficult to photograph stained glass windows thus difficult to do the windows justice with photos. In earlier times, colored glass was thought to be the nearest thing to Heaven’s light, and thus captured the imagination of the people of the Middle Ages. The faithful who were mostly illiterate, received the message of the Gospel verbally, and their faith was encouraged by such reinforcing visual images, created by light reflected from these windows.

Most of the windows are original; they were removed and put in a place of safety before the bombings of World War 2. Some of the church was damaged during the bombings, but the windows were luckily unscathed.

The most recent window in the cathedral was unveiled in 2007. It was designed by the famous German artist, Gerhard Richter, and is made up of 11,200 identically sized squares of glass.

You can see photos of the windows at the Kolner Dom website; just look for the link ‘stained glass’ on the left border.

As is commonly the case with Cathedrals in Europe, Cologne Cathedral also has a small treasury which houses some of the best-kept gems of the ecclesiastical building and can be visited for a small fee (as of 2020, €4 full-price and €2 for concessions). Head inside and you can expect to discover holy relics, as well as artworks created from bronze, silver, and gold.

Largest swinging bell in the world

As well as being one of the most impressive cathedrals in Europe, the South Tower of the Dom boasts the largest swinging bell in the world. The Saint Peter bell can be seen if you walk the 533 steps up to the top of the Southern Tower (for a small fee) and weighs a staggering 24 tonnes. The bell only tolls on special occasions such as New Year’s Day and Christmas Day.

How to visit Cologne Cathedral

Like most cathedrals in Europe, Cologne Cathedral is free to visit and is open every day of the week. However, if you wish to climb to the top of the tower via the steep staircases and be rewarded with one of the best views of Köln, then you’ll need to pay a small fee.

The Cathedral is Germany’s most visited landmark and boasts around 20,000 visitors a day! As such, if you want to see the cathedral without as many crowds, then you’ll want to plan your visit to be in the morning and mid-week if possible.

With this being said, even though I visited Cologne Cathedral with a friend on a weekend during the Christmas Market season, we didn’t need to queue to enter! If you’re looking to delve deeper into the history of Cologne Cathedral, then you might consider booking a guided tour.

Many visitors are drawn to climb the top of one of the Spires at the Dom; they want to take in the view. If they’re not afraid of heights, then the climb does scare some folks. The climb to the top consists of walking up a, very tight spiral staircase. Climbers do get a few breaks in between; waiting for a bunch of kids to race past you, or waiting for people to walk back down and pass you. About half way up, climbers can get a bit of a break by taking a detour to check out the bell tower, where there are little benches and some great views. Also, from the bell tower climbers can look directly up into the spire.