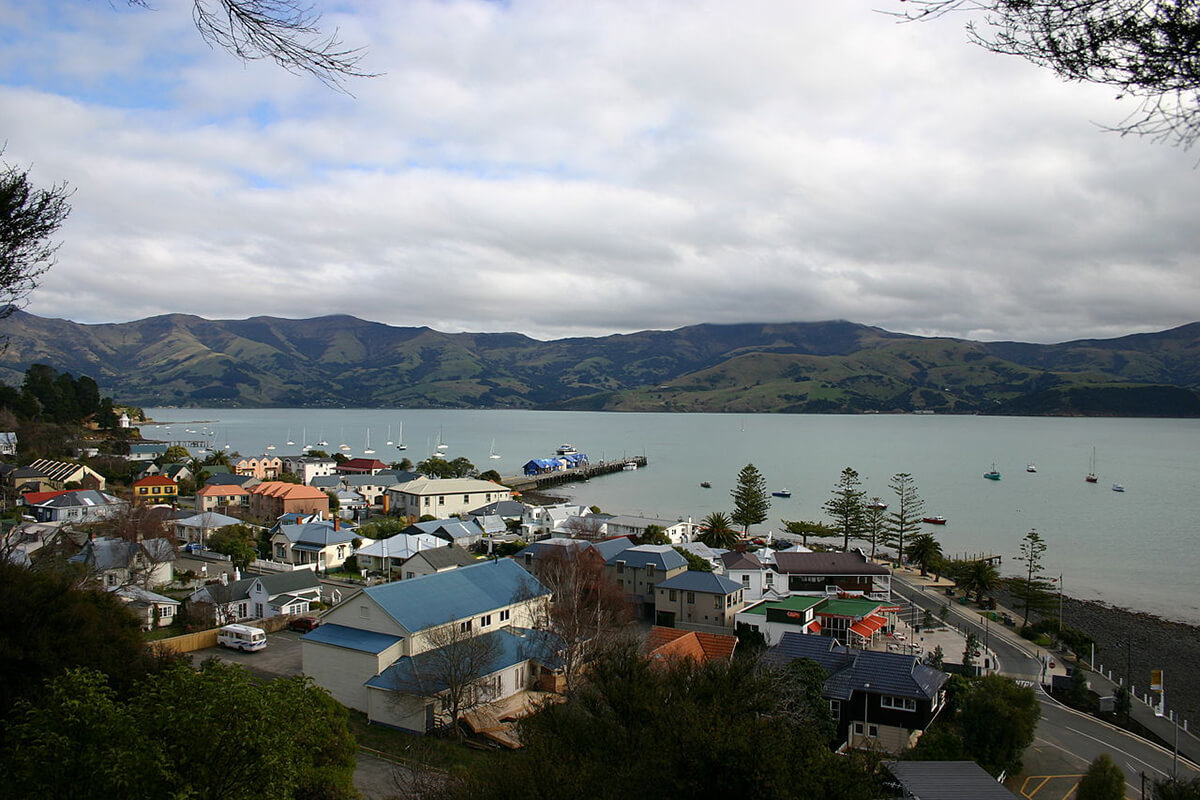 Akaroa is located on the Banks Peninsula about 52 miles (84km) south of Christchurch. The name Akaroa is Kāi Tahu Māori for “Long Harbour.” The peninsula is the remnant of a volcano with a round shape and covered in hills and valleys. It became the main port for cruise ships visiting Christchurch when the nearer Lyttleton port was damaged in an earthquake.

Akaroa is unique in New Zealand because it has French heritage. Back in 1838 a French captain, Captain Jean François Langlois, made a deal with the local Maori to purchase land on this peninsula. The area was originally named Port Louis-Philippe by French settlers after the reigning French king Louis Philippe I. Captain Langlois went back to France, and got together a group of French settlers, who then made their way back to the area in 1840 to start their new life in this French colony. Unfortunately, just days before they arrived back, the British came along and claimed the land for themselves.

This is a large, two-story, house that today it is one of the most popular of the Akaroa attractions. It is the canvas for the artwork of Josie Martin. The gardens are strewn with mosaic creations. They are bold and colorful and quirky, and there is something new to see in every corner. The garden has grown to such a state that it is now recognized as a Garden of International Significance. Spend an hour or two wandering around enjoying the art, then indulge in afternoon tea at the cafe. You can also choose to stay the night at The Giant’s House as it now offers B&B accommodation too. Staying here is one way to see inside the house, otherwise you will need to arrange a special tour.

While in Akaroa take advantage of the French heritage to indulge in some traditional crepes or baguettes. Visitors can choose any of the bakeries to enjoy the same delicious foods.

The Akaroa Lighthouse, an imposing, six-sided, wooden lighthouse, began its life out on a headland near the town in 1880. It stayed there, alerting passing ships to the danger until 1977 when it was replaced by and automated light and them moved into the town. The wooden lighthouse is now on the foreshore and makes a nice end point to a walk around the harbor from the center of town.

1. Rhino in the Hills

There are quite a few short walks in Akaroa to points of interest, but one that is particularly unique is to see the rhino overlooking Akaroa. The walk takes about half an hour each way on a well marked path with great views back over Akaroa Harbour. Be aware that on the way the track is almost all uphill, but at least it’s downhill on the way back into town. Before you get to the rhino, also look out for giraffe and crocodile sculptures too.

Another of the free things to do in Akaroa is a short hike to see Newtons Falls. This hike takes about an hour round trip and takes you to see a waterfall. This is a relatively new hike as until recently the waterfall was located on private lands and was not accessible. Now the area is owned by the local council and is a part of the Misty Peaks Reserve.

This is a longer hike or bike of about 8.5 miles (14km). There is also an added ridge line walk that can be included too for some extra views. The walk can take between 4 and 8 hours depending on the exact route taken. This hike will provide the best views back over Akaroa and the harbor.

This could be the most fun of all the activities in Akaroa. Akaroa Harbour is home to Hector’s Dolphins, the smallest dolphins in the world. This area is home to the biggest population of these endangered dolphins, which have only around 10 000 remaining in total. The best way to see the is to take a harbor cruise.