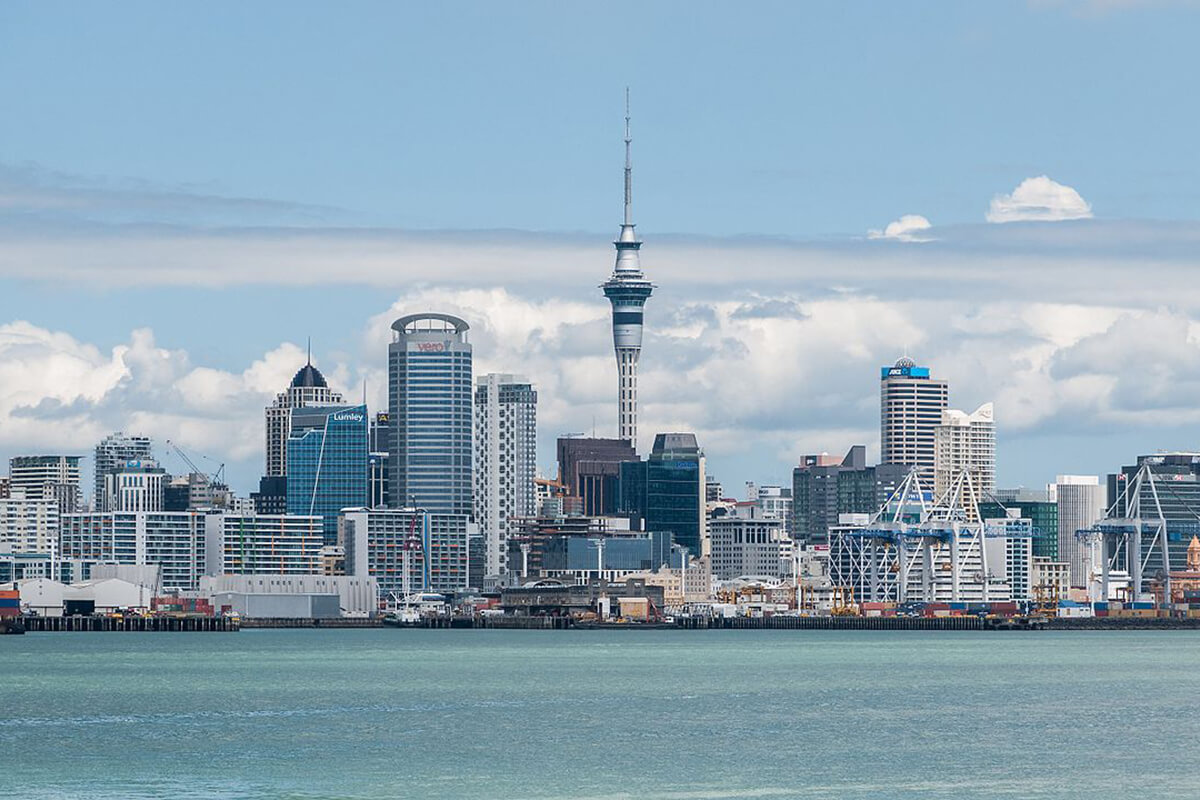 This travel guide to Auckland should help you get the most out of your stay in this city without spending too much money.

The tallest freestanding structure in the Southern Hemisphere, the Sky Tower stands a powerful 1,072 feet and offers spectacular views from its two observation decks and revolving restaurant. Step inside the glass elevator and zoom to the top in a mere 40 seconds. Then venture outside onto the glass-floored main observation deck. All of Auckland’s beauty is spread out before you…and right under your feet! On a clear day, panoramic vistas extend over 50 miles, encompassing the Leigh Peninsula, the Great Barrier Island, the Waitakere Ranges and the Bombay Hills.

The largest caves in the Waitomo area, Ruakuri Cave is a true geological phenomenon. The cave’s subterranean labyrinth boasts winding passageways, vast echoing caverns, and deep crevices. This unique karst limestone landscape was formed under the sea from the solid remains of millions of marine creatures around 30 million years ago. But to the Maori, the Ruakuri Cave are a place of strong spiritual and cultural significance, and it is believed they are the underground realm of Papatunanuku, the earth mother, and touching the limestone’s cool surface makes a symbolic connection with the divine world below.

The Waitomo Glowworm Caves cruise introduces the wonders of this geological phenomenon. Here, tiny glowworms (Arachnocampa luminosa) unique to New Zealand emit a fluorescent blue-green radiance that illuminates the caverns and underground streams the glowworms call home. As you float through the limestone formations, your guide will share information, legends and facts about this fascinating oddity of nature. The largest chamber of the cave is known as the “Cathedral,” an acoustically perfect auditorium that has hosted a number of renowned performing artists.

The Auckland Museum is a neoclassical building, overlooking the picturesque Waitemata Harbour. The outstanding collection features exhibits on New Zealand and Pacific Island cultures and showcases an extensive collection of Polynesian artifacts. Highlights include a large Maori meeting house and a mighty, 82-foot war canoe carved from an enormous totara tree. The top floor of the museum details New Zealand’s involvement in wars against the Maori people as well as its involvement in both World Wars and Korea as well as the country’s peacekeeping efforts.

Arriving in Devonport is like taking a step back in time. One of the oldest settlements in New Zealand, this quaint village on the North Peninsula is noted for its timbered colonial architecture. Surrounded by the waters of the Waitemata Harbour, Devonport offers gorgeous views from every angle as well as a wonderful array of specialty shops and cafés. Stroll along the beach or celebrate Devonport’s rich naval history showcased in its Navy Museum.

If you have a sweet tooth, visit Devonport Chocolates. a family-run business that offers gourmet chocolate made on the premises. In homage to the thousands of tourists who visit the Devonport shop and factory, local artist Fraser Williams has created a line of sweets with illustrated wrappers that capture the essence of New Zealand’s spirit. You’ll also want to admire the beautiful works of renowned hot-glass artist Peter Raos in his gallery and hunt for souvenirs in a myriad of stores.

A popular fixture on Hobson Wharf at the heart of Auckland’s Viaduct Harbour, this exceptional museum presents, preserves and celebrates the bond between New Zealand and the ocean. Accompanied by a knowledgeable guide, you’ll browse the galleries and exhibits detailing the inspirational stories and epic voyages that have shaped the nautical history of New Zealand from the earliest Polynesian settlers right through to today’s yachting prowess. An extensive collection of models, photographs, books, drawings and artifacts is displayed in celebration of the country’s seafaring identity.

Few wineries in New Zealand can claim to have a prouder winemaking heritage than Soljans Estate Wines, family-owned for three generations with over 70 years of wine-making experience. Mediterranean-style décor welcomes visitors, and the local, knowledgeable staff is happy to share the story of how this family, originally from Croatia, became one of New Zealand’s premier wine producers. The vineyard tour includes views of the family’s estate and the cellars. A tasting of some of their award-winning wines, such as Pinot Gris, Merlot and Tawny Port, completes the experience.

Nestled in the picturesque, rolling hills of Waimauku, the 80-acre estate of Hunting Lodge Winery is surrounded by beautiful gardens, vineyards and olive groves. It is here that the very first Sauvignon Blanc in New Zealand was planted, and today the label produces a top-class Sauvignon Blanc as well as other award-winning wines. Seasonal wines available from the cellar are accompanied by a food pairing in this beautiful setting.

Picture yourself flying across the water in a powerful jet boat sporting the latest in Hamilton technology (Sir Arthur Hamilton invented the jet boat in New Zealand in 1954) on a hair-raising tour of Auckland’s breathtaking Waitemata Harbour. Powered by twin 300HP Volvo turbocharged jet engines, your sleek, brightly colored vessel is purposely built for sea conditions and speeds up to 50 knots. Your experienced skipper will wow you with expertly executed fish tails, spins, turns, and power brake tricks while taking in the city’s many local landmarks and highlights. Note: The vessel accommodates guests in grandstand-style seating so the layout ensures that every passenger enjoys a great view of the impressive Auckland skyline.

Famed New Zealand marine archaeologist and deep-sea diver Kelly Tarlton created this extraordinary aquarium to share his love of the ocean with the world. A uniquely designed moving walkway transports you through clear acrylic tunnels for a firsthand experience of deep-sea life. See New Zealand’s only sub-Antarctic penguins in an authentic icy habitat and glimpse a replica of Captain Scott’s expedition hut of 1911. In the Underwater World get up close with stingrays, sharks, sea turtles and a host of other creatures while hands-on displays enrich your experience.

Completed in 1959, the Harbour Bridge links central Auckland with the thriving North Shore community. An Auckland icon, the architectural style of this eight-lane bridge dominates the landscape and stretches over Westhaven Marina. A strenuous walk along the converted paths, walkways and curving arches is a truly exhilarating experience that brings you high in the sky, 200 feet above the sparkling water. During your climb and from the top lookout, take in spectacular views of Auckland, Rangitoto Island, Devonport, and the Waitakere Ranges. Your guide will offer a complete commentary on subjects ranging from the bridge’s history and engineering to various points of interest visible along your route.