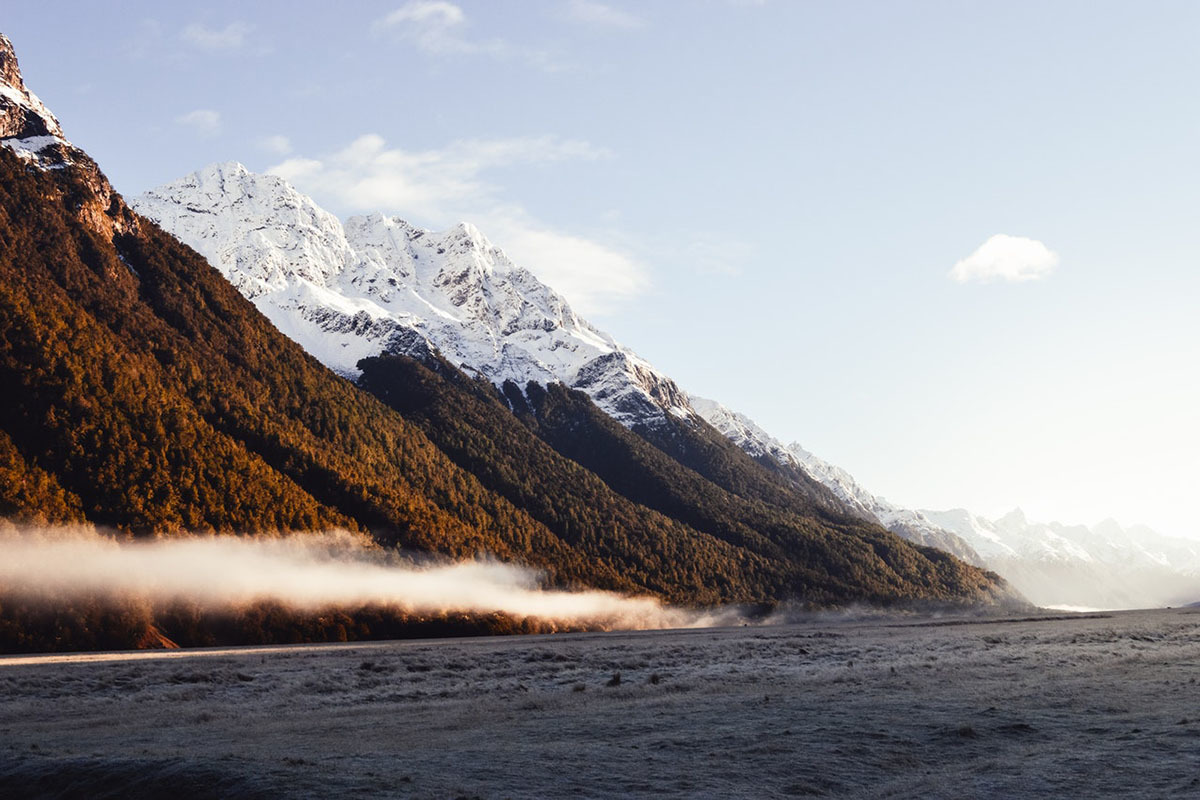 One of the highlights of our cruise to New Zealand was sailing through the stunning Sounds – Milford Sound, Doubtful Sound, and Dusky Sound. The New Zealand Sounds are located at the southwestern end of New Zealand’s South Island and are part of the Fiordland National Park. The Fiordland National Park is filled with a dozen of both long and short fjords accompanied by snow-capped peaks, gorgeous waterfalls, and glacier-carved valleys. You don’t even have to leave your balcony to spot dolphins in the water below or be amazed by the striking height of the fjord walls.

Carved by retreating glaciers, the 15 fjords that make up the Fiordland National Park each have the characteristic steep cliffs. The mountains in the area make up the southern range of the Southern Alps.

The most popular fjord is Milford Sound, by far. Along with the large cruise ships that pass through Milford Sound early in the morning, dozens smaller boats, kayaks, and tourists frequent the fjord daily. The only other fjords accessible by roads are George Sound, Doubtful Sound, and Dusky Sound. While you can visit Milford Sound by road, there is something remarkable about entering the fjord from the sea.

How To Spend Your Day

The day at Fiordland National Park is technically considered a sea day. There are no excursions and you cannot leave the ship. Instead, the ship slowly cruises through the three sounds, staying close by the shore. You’ll know the times the ship will enter and leave each of the fjords beforehand and most captains do well at sticking to the schedule. Announcements will be made in the common areas for updates on the schedule and what to look out for while in each fjord.

This is a cruise where a balcony room is worth every penny. We didn’t have to leave your room to enjoy the scenic views around us. Typically, the first fjord you visit, Milford Sound, will be early in the morning. Cruise ships enter Milford Sound and turn around, so you will not miss either side of the fjord if you stay in your balcony. If you want to go on deck to take photos, you will want to get there early to beat the crowds of people trying to take photos on the top deck. You cruise through both the Doubtful and Dusky Sounds, entering at one point and exiting at another, so staying on your balcony would potentially limit your ability to see both sides of these fjords. When booking your cruise, choose the side for your balcony based on the route you are taking around New Zealand for the rest of the trip. While you may not be able to see the shore for the entire cruise, pick the side that will is facing land. We got a left or port side balcony for our cruise which went from the South Island to the North Island.

Milford Sound is considered the most beautiful of the New Zealand fjords and is by far the most accessible for both cruise passengers and land tourists. According to Maori legend, Tu-te-raki-whanoa carved all of New Zealand’s fjords, starting in the south. By the time he reached the northern Milford Sound (Piopiotahi), he had perfected his technique and made the perfect fjord. Upon hearing about Milford Sound’s completion, Hine-nui-te-po, the goddess of the underworld, worried that people would be so infatuated with the fjord they would never want to leave – so she released the sandflies into the sound. Fortunately, you will not have to deal with any sandfly infestation while on a ship.

Unlike Milford Sound, you will not see a city, roads, or any signs of human activity while cruising through Doubtful Sound. This large and deep fjord provides an atmosphere of peace and solitude with this breathtaking beauty. The cruise ship travels through Doubtful Sound, exiting at a different point back into the sea. The full Doubtful Sound fjord has three distinct arms branching off from the main fjord around Secretary island. The most inland sections of Doubtful sound is too narrow for the cruise ship to journey into and then turn around. Most of the large waterfalls are unfortunately found in the arms of the fjord but might be able to be seen from afar on the ship.

Be on the lookout for wildlife while sailing through Doubtful Sound. You might be able to spot more bottlenose dolphins jumping along the ship, and fur seals and crested penguins on the small islands in the fjord.

Dusky Sound is the most remote and least visited of the fjords that cruise ships travel to. It was named by Capitan James Cook as he first sailed to it at dusk in 1770. At 25 miles long, it is also the longest fjord you’ll visit with many complex parts. Dusky sound is filled with many large islands including Anchor Island, Long Island, and Cooper Island – on these you might be able to see seals, penguins, or other wildlife. In the waters, look out for whales and dolphins.

Dusky Sound’s striking fjord walls are covered in hundreds of waterfalls, which are especially astonishing when raining.